Cider houses of the Basque Country 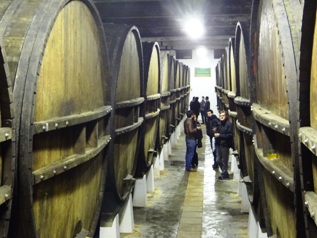 Apart from the legendary pintxos (the often highly-elaborate Basque variant of the Spanish tapa), which are works of art in themselves, between mid-January and mid/late April is cider season in the Basque Country. The highest concentration of sagardotegiak (cider houses) is to be found just south of San Sebastian (Donostia) around the town of Astigarraga. 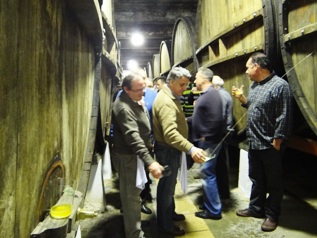 Pouring cider direct from the barrel_basquecountrywalks

Basque cider-making goes back centuries, and in days gone by pretty much every farmstead would have its own apple press and produce cider for the immediate family, friends and neighbours. The Basque oral tradition of verse improvisation also developed on cider-producing farms after a few glasses.

After a decline during the Franco era, in part due to the advent of industrialisation and the move away from rural settlements towards the towns and cities, cider production and cider consumption are now very much on the increase, so much so that Basque cider producers normally have to bring apples from Galicia, Normandy and in recent years from the Czech Republic to blend with locally-grown varieties. The cider itself has between 5-6% alcohol content and has quite a sharp, albeit often fruity taste.

In every sagardotegia there is a person in charge of opening the huge wooden barrels for diners – following the cry of ‘txotx’, an orderly queue forms beside a barrel and diners catch the cider in a tumbler glass as it pours out in a thin jet once the barrel has been opened. The procedure is to catch just a small amount at the bottom of the glass which is downed in one before any sediment has time to form – the same principle is used further along the coast in the cider houses of Asturias. Wooden buckets are placed in front of each barrel to catch the surplus cider that misses the glass. Locals never fill their glasses, although there is no limit on the amount of times you can return to any of the barrels for more! 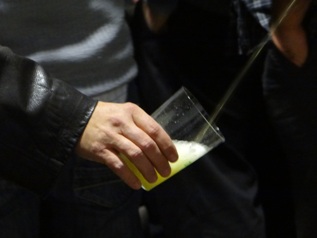 What makes Basque cider houses unique is the accompanying menu, which rarely varies: cod omelette usually also followed by fried cod (or sometimes hake) cooked with green or red peppers, and then the pièce de résistance – a large, succulent T-bone steak cooked to perfection (although be warned that the local preference is for it to be cooked rare, at times verging on raw in appearance). Until some years ago, the tradition was for locals to take their own steaks to grill with the sagardotegia providing the rest, although now most places offer the full menu.

In the unlikely event that you’re still hungry after all this, more can be ordered! All the food is shared, making for an extremely sociable experience. It’s totally acceptable (and even advisable) to gnaw at the meat remaining on the bone with your hands. Dessert invariably consists of walnuts (with nutcracker included) and local Idiazabal sheep’s cheese. In the most traditional cider houses, diners eat standing up at rustic wooden tables, facilitating quick access to the barrels for cider refills. Usually plenty of singing goes on in these places too.

The sagardotegiak only keep their barrels open to the public until around the end of April at the latest, after which time the bottling season starts. Otherwise, once the warm weather starts, the cider would go off in the wooden casks, although stainless steel casks with thermostats are now being used to enable many places to stay open all year. There are now also several cider houses that have started to offer guided tours with tasting, without the full menu.
If you are visiting at this time of year to tour and walk in the Basque Country, don’t miss the chance to experience the ‘txotx’ season at one of the more rustic places, full details of which can be obtained from local tourist offices.