We offer a series of guided short walks 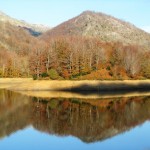 of up to around 2h30min duration which are considerably less strenuous than the guided walks elsewhere on this website, and thus suitable for walkers/ramblers of all ages. Walking routes can take two forms: in some cases as a half-day morning excursion departing around 09.30 and returning 13.30 to 14.00 (walk only) and in others as a fuil day trip including the option of traditional lunch with refreshments at a rural restaurant or inn either during or at the e 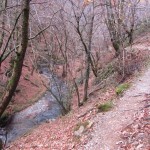 nd of the walk, and the chance to take a leisurely look at the pretty villages in the area before returning to your hotel in the late afternoon, around 17.00 to 17.30. Download BasqueCountryWalks_price_list_Guided_Short_Walks_2021 to see prices for all the walks shown. The routes described below offer a variety of different striking landscapes and rural architecture throughout the Basque Country – watch this space as new routes will be added by spring 2018.

The area around Arditurri has been mined since Roman times and the actual mines have been recently restored and can be visited with a guide. This loop starts from the end of the Arditurri “bidegorri” or cycle track, the former railway line that used to transport the ore down to the port of Pasaia. The walk takes us past the entrance to the main mine and its interpretation centre and alongside a canal, with spectacular views towards the crags of Peñas de Aia. The canal route joins a path beside a mountain stream that descends from these crags, which we follow up into the forest as far as the beautiful area around the Unailkeu borda (shepherd’s hut). The return route takes us via a fabulous viewpoint over the mines and past a peculiar sculpture back to our starting point (30min drive each way) 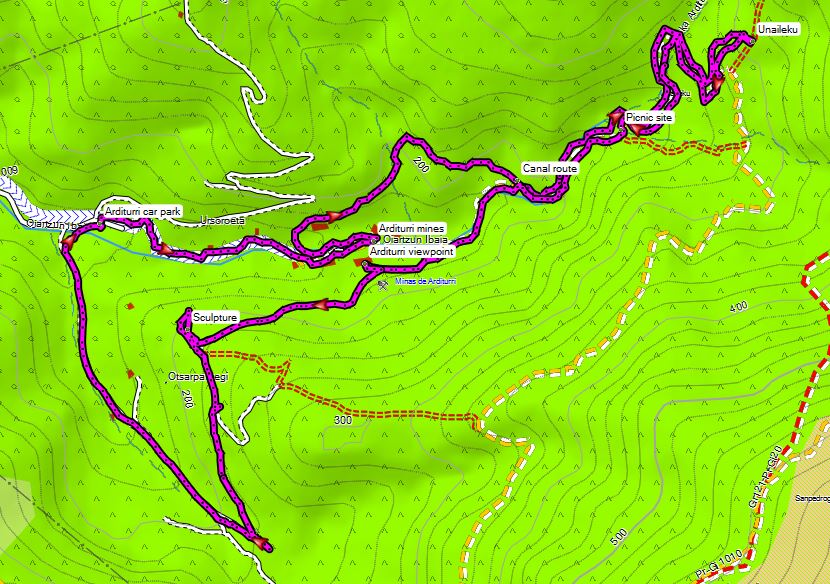 This circuit starts from the Ibardin pass right on the Spanish-French border and descends through lush forest on the GR10 Trans-Pyrenean footpath to the isolated farmhouse of Benta Inzola, the optional lunch stop as described in option a) above. From here we follow the best preserved section of paving upstream of what was known as the Calzada Romana or Roman Road,  although this route was most commonly used by smugglers in the 19th and early 20th centuries to ship goods back and forth through this isolated part of the Pyrenean foothills. We cross the stream 3 times and emerge on the border bridge, following a pretty path first through more woodland and then across the ridge itself with tremendous views towards the sea and Mt Larrun, back to Ibardin (1h drive each way) 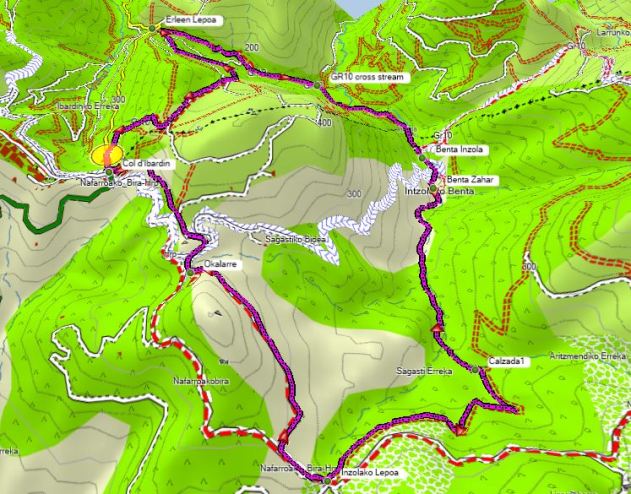 The walk starts from outside the tourist office in Donostia-San Sebastián, goes to the far end of Gros beach and then climbs up to Mt Ulia for splendid views over the whole city and its 3 beaches. From there a delightful path, with some pretty cobbled sections, continues along the cliff top. This walk follows the same route as the Faro de la Plata coastal path hike from Donostia-San Sebastián (see the “Guided Walks Gipuzkoa”section) for about halfway along the cliff path from the city – perhaps the most scenic part – but then loops back over the top of Mt Ulia to a viewpoint where the views extend to Biarritz and beyond. From here the path descend via some curious rock formations, the largest of which was used from the 10th century as a lookout point for approaching whales when the Basque whaling industry was in its heyday, followed by a descent through pretty mixed forest to complete the loop back to the city. 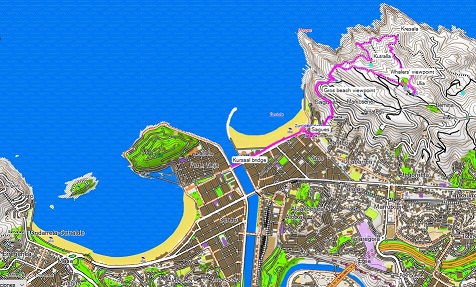 The drive is an experience in itself to the start of this walk, taking us as it does on minor roads through wild mountain scenery and one of the remotest, least inhabited parts of the Basque Country in the heart of the Baztan region. The walk itself takes us through some enchanting forest beside a beautiful stream, past the isolated farmhouse and trout farm Etxebertzeko Borda, to the restored watermill of Infernuko Errota in the heart of the forest – the “Mill of Hell” – a place much associated with smuggling in this borderland area. Optional lunch at the Etxebertzeko Borda farmhouse and trout farm and return drive to to Donostia-San Sebastián, with a stop at the delightful village of Etxalar (1h15-1h30min drive each way)

The walk starts from the delightful fishing village of Pasai Donibane, following its winding main cobbled street lined with historic buildings, including the house where Victor Hugo once resided, and onto the pretty main waterside square with its colourful fishermans’ houses. Continuing almost to the narrow mouth of Pasajes harbour, we climb fairly steeply up to the start of the cliffs and follow the GR121 Tour of Gipuzkoa route on a path at times literally cut into the rock high above the harbour. This section of the coast, known as Talaia, is one of the most geologically interesting and spectacular. As we gain height, the path levels out, offering some sublime views over the Atlantic and towards the mountainous hinterland and crosses some meadowland with grazing horses to return on the coastal Camino de Santiago route back to the harbour (20min drive each way ; Pasai Donibane can also be accessed by city bus from Donostia-San Sebastián and cross-harbour ferry). 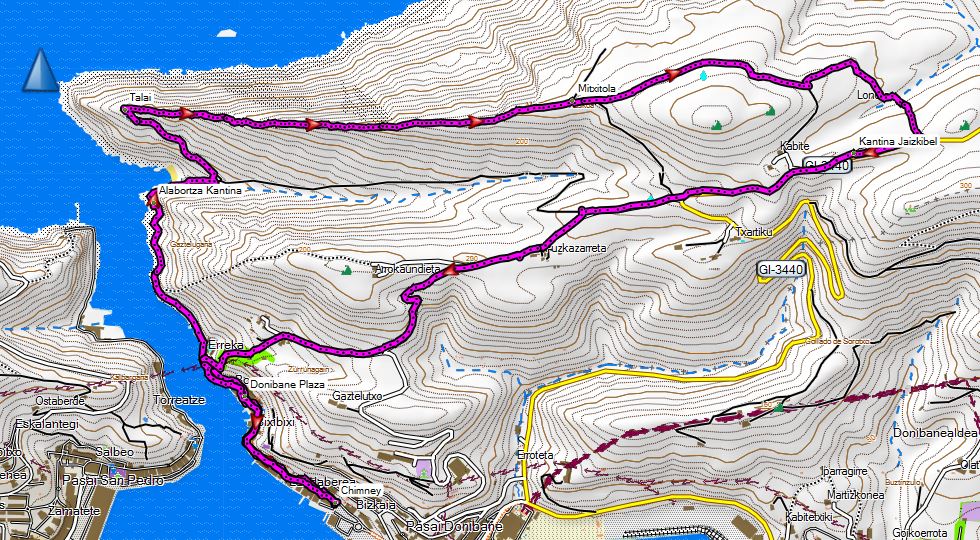 This is a beautiful walk starting from the Lizarrusti pass at the eastern end of the Sierra de Aralar. This delightful walk through forest takes us up beside a spectacular gorge to the Lareo reservoir, in the heart of the mountains. We complete a loop around the reservoir before pausing on the return walk at an idyllic spot beside a boulder-strewn stream with waterfall. Optional lunch at the Sierra de Aralar Interpretation Centre at Lizarrusti and return drive through the rural hamlets that make up the municipality of Ataun to Donostia-San Sebastián (1h drive each way) 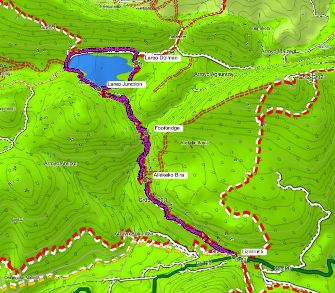 The walk starts from the pretty hilltop village of Aia with its attractive main square and imposing church of San Esteban. Once above the village, we enter the Pagoeta Nature Reserve on a path that zigzags up the hillside affording increasingly spectacular views towards the sea and coastal villages, with farmhouses dotting the verdant landscape. Some sections are on well-preserved old paving and pass through beech and pine forest until reaching the beginning of the 1st of the Stations of the Cross, still in the forest at this point. We follow the crosses up to the first. lower summit to a giant white cross from where the views in all directions are sublime. A short distance further on brings us to the actual summit of Pagoeta just above a shepherd’s hut, returning over high meadowland and then back through the forest to Aia (40min drive each way)

This walk follows one of the most spectacular branches of the Camino de Santiago through the famous San Adrian tunnel, a natural limestone tunnel housing a tiny chapel bearing the same name. This is followed by a short walk along the best-preserved section of the old Calzada Romana or Roman road, with paving dating from the 13th century, although it is claimed this route has been used since Roman times. The walk is completed by a short detour to an incredible viewpoint over the tunnel and the Sierra de Aitzkorri range. Optional lunch at the hilltop inn Ventas de Otzaurte and return drive via Zegama and the walled village of Segura to Donostia-San Sebastián (1h drive each way)

This circuit starts from the delightful fishing village of Getaria, birthplace of Sebastián Elcano, the first person to successfully circumnavigate the globe. This interesting and varied loop initially follows a nice cobbled section of the coastal Camino de Santiago route to San Prudentzio, the heart of txakoli wine production. Txakoli is a sparkling dry white wine that is grown on the hillsides around this area close to the sea, and much of the walk meanders through the vineyards, with enticing views towards the rugged coast and villages and also towards the mountainous hinterland (30min drive each way) 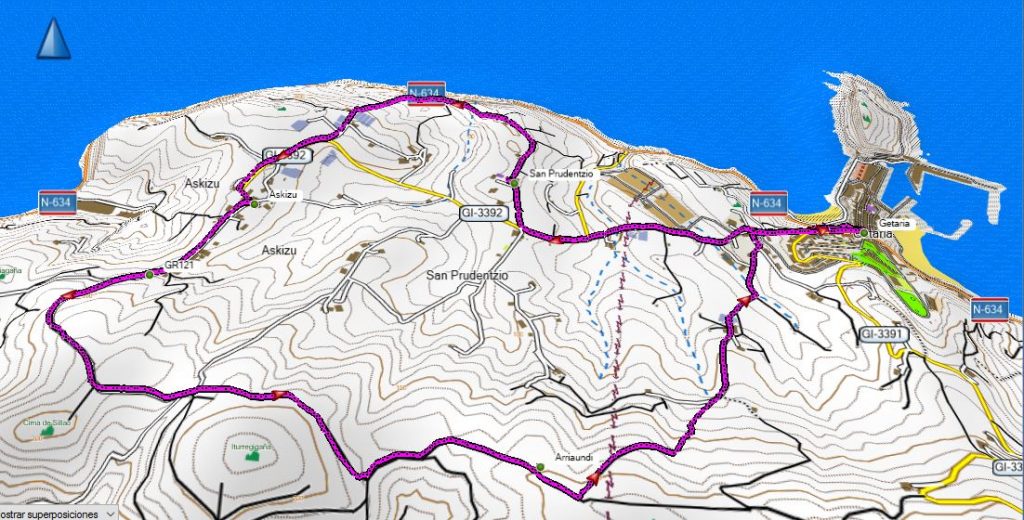