The closest real mountain to Donostia-San Sebastián and as such affords great views both over the Atlantic coast and the mountainous hinterland from the summit. An added bonus is the chance to see one of the finest preserved ancient menhirs in the Basque Country, together with a stroll along a fast-flowing mountain stream strewn with large boulders. 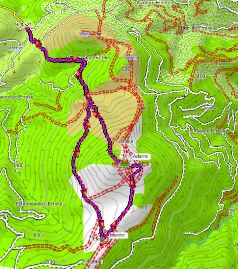 The Comet Line was a resistance group in Belgium and France for allied airmen during WW2 that operated an escape route for the airmen through occupied territory and across the Pyrenees into neutral Spain, from where they could return home safely. The classic Comet Line route started in Brussels and ran down western France via a series of safe houses to the French Basque Country, from where local Basque mountain guides known as “mugalariak” helped the airmen cross the Pyrenees and the Bidasoa River forming the border with France and Spain. Our walking route starts at Endarlatsa on the Spanish side of the river and follows the route the airmen would have taken. The path climbs dramatically through a gorge and around the side of the crags of Peñas de Aia, descending the mountain via the first safe house above the hamlet of Ergoien, close to the village of Oiartzun. Apart from several historical points along the way, the scenery is glorious throughout this fairly long but very rewarding hike.

This loop starts at the hamlet of Ergoien and initially follows the route along the Arditurri “bidegorri” or cycle track to the fascinating old mining area of Arditurri (an interesting, shorter loop around which can also be done as a half-day option described in the Guided Short Walks/Day Trips section of this website). After climbing through beautiful forest up the slopes of Peñas de Aia past the Unaileku borda (shepherd’s hut), the path ascends almost directly to the crags of this mountain to join the Comet Line route mentioned above at the popular hiking crossroads of Elurretxe. From here we follow the Comet Line on our descent via the first safe house above Ergoien and back to our starting point, to complete a very varied, scenic loop.

Ernio is one of the best loved and easiest to climb mountains in the Basque Country, and its summit, which is covered in crosses of all different sizes, is one of the most photographed. The old farmhouse at Iturriotz is the starting point for this walk, and we very emerge on the emerald-green pastureland and limestone karst typical of this massif. The final section is on a beautiful stone path cut right into the rock, with amazing views down to the village of Regil and what is known as the Balcón de Gipuzkoa. On our descent we can stop for refreshments at the inviting refuge of Zelatun, nestling directly beneath the summit. 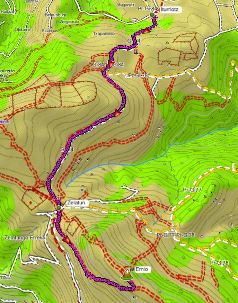 The walk starts from outside the tourist office in Donostia-San Sebastián, goes to the far end of Gros beach and then climbs up to Mt Ulia for splendid views over the whole city and its 3 beaches. From there a delightful path, with some pretty cobbled sections, continues along the cliff tops. There is plenty of bird life to view along the way, and also some remains of an interesting aqueduct, until we emerge at the end of the costal path at the Faro de la Plata lighthouse above the narrow entrance to Pasaia harbour. A steep descent from the lighthouse down a series of steps brings us right to the mouth of the harbour, from where we walk alongside the narrow channel connecting the harbour to the sea to where a small boat plies back and forth the two sides of Pasaia – Pasaia San Pedro and Pasaia Donibane -, both of which boast some strikingly colourful half-timbered fishermen’s houses. A short walk on through the narrow main street of Pasai San Pedro brings us to the bus stop, from where it is just a short ride back to our starting point – so no car transfer is required for this walk.

This route offers the chance to see the best of the geological phenomenon known as the flysch, an amazing coastline with spectacular cliffs forming one of the longest continuous rock strata in the world that is now protected within the Basque Coast Geopark. This guided walk for the most part follows the GR121 Vuelta de Gipuzkoa route and the starting and end points are accessible by train (although car transfer is also possible from Donostia-San Sebastián to Zumaia at the start of the walk). Zumaia is a bustling fishing port with an attractive old town and nice beaches, and the route first passes the chapel of San Telmo, perched precariously on the clifftops. For most of the way, the path hugs the clifftops and descends to the shore around Sakoneta, the most striking area of flysh. before continuing on to the fishing port and small summer resort of Deba, where we return by train either to Zumaia or directly back to Donostia-San Sebastián.

Starting from the scattered farmhouses of Ataun-Urkillaga, the path ascends gently up the mountainside first to Agaotz and then to Sarastarri, two of the lesser known peaks in the Sierra de Aralar which, despite their relatively modest height, offer some of the best views over the entire range towards more famous peaks such as Txindoki. Views are spectacular all the way to Sarastarri, from where we descend through beech and silver birch forests, detouring to visit the legendary Sarastarri cave a little below the summit. From the caves we descend further to the small mountain lake of Lareo, and hence on a lower level track back to the starting point of the walk. 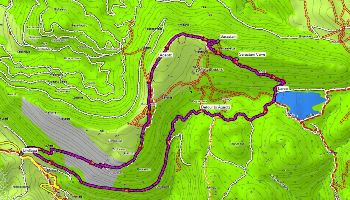 This walk starts from the hilltop hamlet of Bedaio, south of Tolosa. After an initially fairly steep ascent from the village, the path traverses a beautiful beech forest and then emerges on the open mountainside right at the foot of the vertical north face of Balerdi, one of the most stirking peaks in the Sierra de Aralar. A short detour from here brings us to the chaos of rocks known as Urreako Haitzak or “Golden Rocks” in Euskara, from where the views back towards Balerdi and over other mountains in the area is about as spectacular as it gets in the Basque Country. There is also a good chance of spotting griffon vultures around the rocks before continuing the loop back to Bedaio. 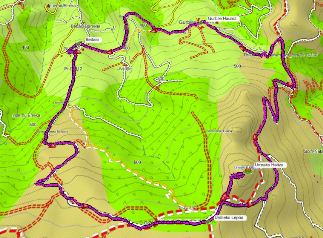