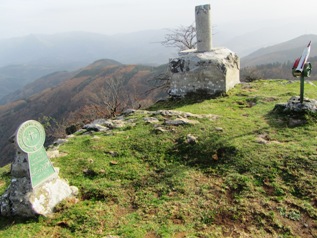 Murumendi is, geographically speaking, at the very centre of Gipuzkoa and, despite its relative modest height (858m) and ease of access, affords 360º degree views of all the most emblematic peaks in the Basque Autonomous Community. The summit is most commonly climbed from the towns in the Oria Valley, but being the every-inquisitive soul that I am, I decided to opt for a lesser known route from the hilltop hamlet of Santa Marina where there is a fine restaurant and bar offering splendid views over the Oria Valley towards the mini-Matterhorn that is Mt Txindokiand the Sierra de Aralar beyond. It’s just 40 minutes’ drive from Donostia-San Sebastián on the coast, making a pleasant getaway that is even practical in winter, what with the days getting shorter.

Mari depicted in a ball of fire_basquecountrywalks

Murumendi has long been associated in Basque mythology, in particular with the legendary figure of Mari, one of whose dwellings was said to be a cave inside the mountain’s vertical east face.

According to legend, Mari the witch would cross the valley from Murumendi across to another cave on the side of Txindoki and other mountains in a ball of fire, although would sometimes do so in the shape of a cloud or even take on a human form. The walk itself partly follows a branch of the Camino de Santiago from Santa Maria and passes by a couple of beautiful old farmhouses on the hillside before ascending pretty steeply through pine forest to meadowland. Murumendi summit itself is curious for its limestone outcrops and the impressive east face mentioned above.

Just below the summit marker I coincided with a flock of grazing sheep who seemed not to be alarmed by my presence – and I only met two people descending as I was on my way up. All in all, a nice walk that can be done at any time of year that I would categorise as moderate. 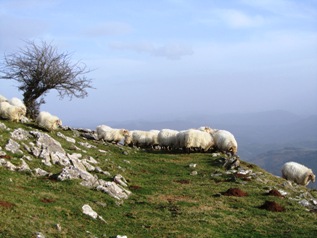 Sheep grazing just below the summit of Murumendi_basquecountrywalks