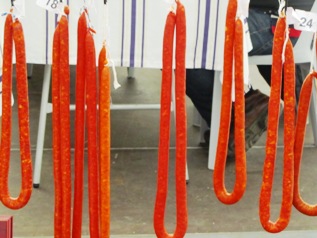 The Santo Tomás Fair, held each year on December 21st in some parts of the Basque Country such as San Sebastián, Bilbao and Azpeitia, is a hugely popular major farmers’ market.

The Santo Tomas Fair dates back to the mid-19th century, when most land was cultivated by farmers who passed down the lease from generation to generation and would traditionally come to San Sebastián to pay the landowners their annual rent.

The leaseholders would take advantage of this day to sell their wares and buy other products which they couldn’t obtain in their own villages. 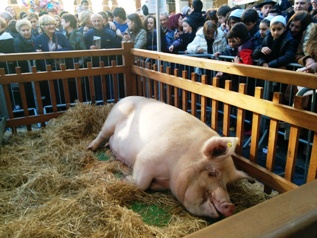 Maikruz, the 380-kilo pig and star attraction at the Santo Tomás Fair_basquecountrywalks

With fine sunny weather yesterday and the fact of the fair being on a Sunday this year, San Sebastian’s Feria de Santo Tomás drew especially large crowds to its old part. As always, the star attraction is the giant pig put on display in a pen in Constitution Square – known locally as La Consti – the focal point of the fair at the very heart of the old part. This year’s pig, known by the name of Maikruz, weighed 380 kilos and, perhaps wisely bearing in mind the large number of people jostling around her pen to get a peek, appeared to spend most of the day fast asleep, oblivious to the hustle and bustle going on around her. 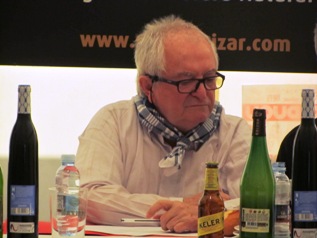 On the subject of pigs, food stalls all over the old part sell txistorra, a kind of fresh, uncured, reddish–coloured sausage that gets consumed in gargantuan quantities on the day of Santo Tomás. There was also a txistorra competition held yesterday in Plaza de Gipuzkoa, a couple of blocks south of the old part, where the judges included one of the Basque Country’s most famous chefs, Juan Mari Arzak, owner of the famous 3-Michelin star Arzak restaurant on the outskirts of San Sebastián. 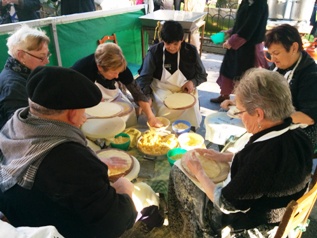 There is no finer way to down some txistorra than wrapped in a talo, a kind of flat bread made fresh from corn flour – one of this writer’s personal highlights of Santo Tomás is to breakfast on talo with txistorra (or sometimes bacon and Idiazabal cheese) before the fair gets too crowded with people by late morning – each talo stall has its team of mostly ladies making the talos, some mixing the flour and others kneading it into a flat pancake shape and then throwing it on the grill. Schools in San Sebastián also set up stalls in and around the old part to sell txistorra, cheese and bars of chocolate (the latter also go in the talos to make a sweet option), with pupils volunteering each year to man the stalls. 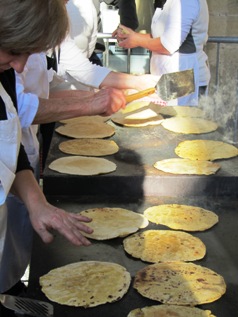 Other features of the market include a large fruit and veg and bread stall in la Consti and a display of farm animals – chickens, donkeys, sheep, horses and goats. There was plenty to keep the kids happy this year, apart from trying to glimpse of Maikruz and the other animals on display, in the form of a scarecrow competition, bread making workshop and outdoor board and table football games. The old part was absolutely jam-packed with people till well into the evening, with copious quantities of cider, wine and beer being consumed as ever – by mid-afternoon, it took me about 15 minutes to walk from one end of the central street in the old part, Fermin Cabetón, to the other, in an attempt to force my way through the crowds, although my own cider consumption may have played a small part in this – all part of the fun of Santo Tomás! I can’t wait till next year for some more talo.