The Pagan Carnival in Ituren – cowbells and chainsaws 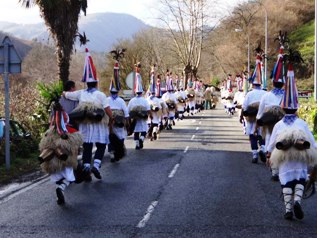 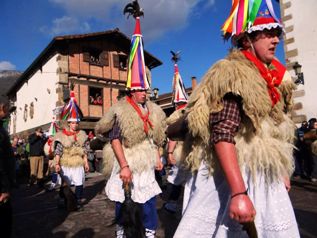 The Baztan area of northern Navarra (Nafarroa in Basque) is perhaps the part of the Basque Country where traditions have been best preserved. The area boasts perhaps the most attractive Basque villages, where the ancient Basque language Euskara overwhelmingly remains the lingua franca and deep-rooted cultural traditions have been best maintained. The scenery is glorious, with some tempting excursions including the ascent of Mendaur, the region’s most spectacular peak, the route for which is described in detail in my Landscape Guide to the Basque Country.

At the base of the mountain, accessible on car tour 2 in the same guide The Baztan Valley of Northern Nafarroa and Pyrenean Foothills, are the extremely picturesque small villages of Ituren and Zubieta, 3 km apart from each other, normally idyllic sleepy places which come alive on the last Monday and Tuesday in January for their traditional carnival. The central part of the carnival involves the Zanpantzar, a relatively new term coined to describe the ancient pagan processions that travel through the streets of Ituren on the Monday and Zubieta on the Tuesday.

Those taking part in this ancient ritual spend the whole morning getting dressed in sheepskins with large copper cowbells attached on the back, and are known by the locals as Joaldunak, (LIT: from the Basque joare meaning “cowbell” and the possessive suffix dun – meaning “person who carries something” – in this case, cowbells). Joaldunak wear the abarka rubber-soled shoes tied by rope around the calf typically used in rural communities all over the Basque Country, and very tall, pointed, conical hats. The Joaldunak need to walk in rhythm in such a way as to make the cowbells ring in unison, which is quite uncomfortable and takes some getting used to, and as they parade through the village give the impression they are almost bouncing over the cobbles. 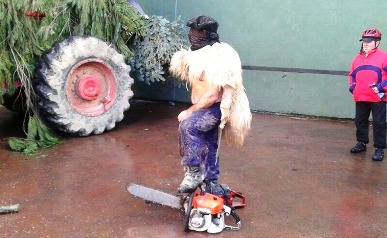 The processions leave both Ituren and Zubieta around midday on the Monday, meeting at a halfway point on a bridge in the outlying neighbourhood of Latsaga. They then join forces to form a single parade, returning to Ituren. On the Tuesday the procedure is repeated, although the Joaldunak return to Zubieta instead. Each group comprises between 40 and 50 people, who end up in the main square of each village, to continue the merrymaking with plenty of dancing, singing and, of course, this being the Basque Country, eating and drinking.

While the Joaldunak make their way to and from each village, locals wearing grotesque masks of troll-like characters, witches and devils roam the streets, while others wearing little more than their underpants and bandages completely covering their heads except for small holes cut out for their eyes and mouth wield chainsaws – nobody apparently gets hurt, although being chased down the main street of Ituren by a madman carrying a chainsaw at this year’s carnival has been an experience this author won’t forget in a while. 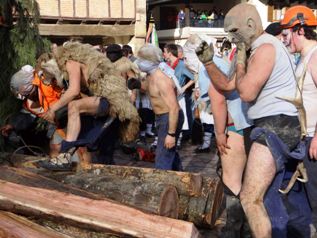 The procession takes on a ritual aspect that is closely linked to nature. The rhythmic sound of the cowbells in unison is said to frighten away the evil spirits and arouse the dormant energy lying within the land, although the origins of this practice may also be linked to a desire on the part of local shepherds scare off wolves in order to protect local sheep.

If you wish to get to know this area better, I cannot recommend highly enough a stay at the wonderful house of Georgina Howard in the tiny village of Amezti, just outside Ituren. She runs a variety of excellent tours and homestays in the area and is a most charming host. Full details are available on her website http://www.pyreneanexperience.com/author/georgina-howard/